► Go to our Dance for Joy! website for other great dance classes and events! 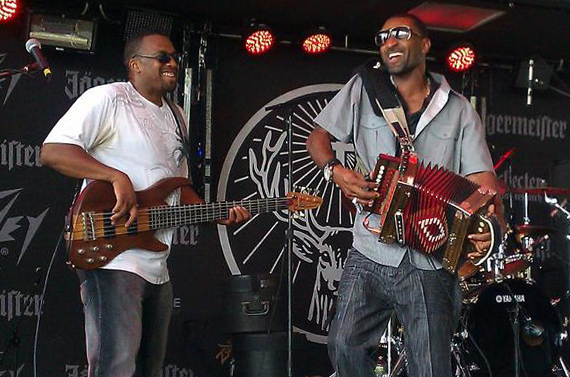 Straight outta Southwest Louisiana, the heart of Creole country, Curley Taylor and his band, Zydeco Trouble, bring that joyful, alternately hard-driving and bluesy zydeco rhythm that keeps audiences dancing — and always leaves them shouting for more. Curley's smooth, soulful vocals and the band's monster grooves will have you on your feet and shakin’ to the beat all night long. curleytaylor.com

Beginning Zydeco dance lesson by Sean Donovan | GatorBoyProductions.com
Sean Donovan combines passion for music and dance with his great love of teaching to provide joyful, exciting dance classes for all skill levels. Positive and playful, Sean is a creative and highly effective communicator, with intuitive movement awareness and a focus on the vital power of dance to delight and transform us. A professional instructor and DJ since 1999, Sean teaches partner dance nationally as well as year-round in Seattle, and has been on faculty with Northwest Dance Network, nwdance.net, since 2004. In addition to Swing (his first love) and Zydeco (a profound connection prompting numerous expeditions to Louisiana and Texas), Sean revels in teaching Blues, Waltz, Whiskey River Jitterbug, Country Two-step, Cha Cha Cha and more. A professional DJ as well, Sean produces dances, provides music for special events and can be heard hosting live radio on KBCS 91.3 FM. Contact Sean about private or group lessons. 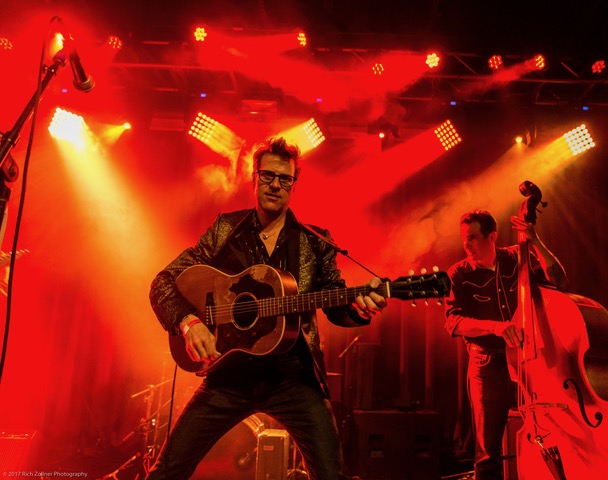 Billy Joe Huels, leader and trumpeter of the established band The Dusty 45s, has inspired and fired up crowds for over two decades from coast to coast. Beginning in 2016, when not on tour, Huels created a weekly gig in various juke joints throughout Seattle called, “The Wednesday Night Club.” He joined forces with guitarist and singer Rod Cook, upright bass player Robin Cady and drummer Kohen Burrill to form “The Billy Joe Show.”

"The Billy Joe Show" brings a dynamic sound and vintage style to the stage. They champion the foundations of American roots music, honky tonk, jump blues and rock and roll. The band belts out and delivers signature Dusty 45s tunes while mixing in classic and obscure covers ranging from Buddy Holly to Hank Williams and Louis Armstrong. facebook.com/dusty45s

Beginning Swing/Country Two-step dance lesson by Hallie Kuperman | CenturyBallroom.com
Hallie Kuperman is the owner of Century Ballroom and The Tin Table restaurant in Seattle, Washington. Since 1991 she has taught pretty much every form of social dance with the exception of Argentine Tango (for which you have to have prettier legs!). Currently she teaches Salsa and Waltz. She produces, co-choreographs and performs in Century's cabaret shows. Since 2005 she has been the co-instructor for NW School's Social Dance Program. Since 2010 she has helped produce the "Dancing With The Stars"-style fundraiser, "Seattle Dances," for Plymouth Housing Group. She has taught at Google, Microsoft, Team Survivor Northwest, EMP, University of WA, Cornish College of the Arts, Folklife and more schools and private lessons than she can remember. Her passion is Century Ballroom, her students, clients of the Ballroom and The Tin Table and creating a community that people will never forget.

Nobody swings like Casey MacGill! Think Nat "King" Cole meets the Mills Brothers. Fats Waller meets Fats Domino. Slim Galliard meets Fred Astaire. It is American music of the roaring past and righteous present, woven into a seamless, beautiful whole. At the core of Casey’s sound are his band's sometimes sweet, sometimes rough-hewn three-part harmony vocals and a piano-ukulele-bass-and-drums rhythm section that swings in a variety of textures. caseymacgill.com

Beginning East Coast Swing lesson with instructors Daniel Newsome and Robin Nunnaly | The Home of Happy Feet
Daniel Newsome has been a professional teacher, performer, dj, historian and avid social dancer since 1996. He is considered a preservationist and an innovator in Lindy Hop, Aerial Dance, Blues, Balboa, Shag, Tap and more. Daniel learned from many teachers of both the modern and original swing era to become a fixture in the national competitive scene. He has won at major national competitions such as the Ultimate Lindy Hop Showdown, Midwest Lindy Fest, Reno Dance Sensation, National Jitterbug Championships and the Rhythmic Arts Festival. His clear coaching style puts him in front of thousands of students every year.

Robin Nunnally has two decades of experience in the world of swing and vintage vernacular jazz dances. Over her many years of dancing, she has dabbled in (and intensely studied) a number of styles and dances from the Ragtime era of the 1910s, to the more classic sock hop style of the 1950s, and everything in between. Robin has been a team member and choreographer on a number of well-known dance teams, including the Rain City Rugcutters,Jackson Street Lindy Hoppers, and the Sister Kate chorus girl team, of which she was a founding and longtime member. Her current projects in the Seattle swing dance scene include running her twice-a-month dance, Balboa, Blues & Booze, under the organizational group, The Hot Rhythm Club. She is also the co-director (along with Casey Schneider) of the Sister Kate Dance Company, a 20+ all female vintage solo jazz dance troupe. 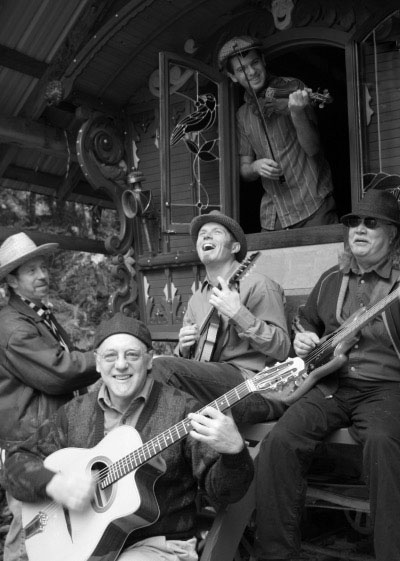 Ranger and the 'Re-Arrangers' | Gypsy Swing/Variety
6‑9:30pm in Occidental Square

Seattle Gypsy Jazz band Ranger and the "Re-Arrangers" evoke the spirit of a Paris café and the raucous energy of a Gypsy campsite with their unique twist on gypsy jazz. "At the heart of their sound is Ranger Sciacca's sweet violin playin, his sense of melody and daring improvisations" (World Rhythm Webzine). The band's repertoire includes swing standards, traditional Gypsy melodies, the music of Django Reinhardt and Stephane Grappelli, and Ranger's unique originals. Ranger and his father Michael formed Ranger and the "Re-Arrangers" in 2006, after returning from the Django Reinhardt festival in Samois, France. In the years since, the band has released 3 CDs and played over 500 shows, including summer concerts, festivals, swing dances, art openings, and weddings. www.rangerswings.com

Beginning East Coast Swing lesson with instructors Elaine Buchignani and Stefan Huynh | Savoy Swing
Elaine Buchignani is a Lindy Hop, Balboa, Charleston, and Vernacular Jazz instructor with an extensive and diverse dance background. Since childhood, she's studied and taught everything from Ballet and Modern to Ballroom and Pilates. After college, she caught swing fever in the jazz clubs of New Orleans and hasn't looked back. Today she regularly teaches, competes, and performs all around the country. As an instructor, she emphasizes quality of movement, human connection, technique, and musicality.

Stefan Huynh started partner dancing in high school and has studied many disciplines of partner dancing since then, including Ballroom, Country Swing, Salsa, Argentine Tango, Brazilian Zouk, and more. However, he fell in love with jazz and blues music and has been obsessing over Lindy Hop, Balboa, and Blues Dance ever since. He performed for many years with the Big Apple Lindy Hoppers, the Amazebals, and Yeah Man in New York City and has won and placed in many competitions around the country. Drawing from his extensive partner dancing background, his classes center on nuanced partner technique and musicality.

Portage Bay Big Band is one of the most consistent and popular Big Band Swing bands in the Northwest. They deliver a sound fully encompassing the hot vitality of the Swing years and show the crowd, young and old, a really great time. portagebaybigband.com

Beginning East Coast Swing lesson with instructors Guy Caridi and Nancy Fry | NorthwestDance Network
Guy Caridi has been dancing since 1988, performing and choreographing since 1991, and teaching since 1993. He is a founding member of Seattle’s Savoy Swing Club and with his dance partner, Nancy Fry, the first couple from the Pacific Northwest to teach Lindy Hop and Balboa. He has taught and performed internationally and is well known for his respectful, sensitive, and humorous teaching style. Guy has been artistic director of the Savoy Swing Club Performance Troupe for over fourteen years. In 1999, Guy and Nancy took home trophies in the Lindy Hop and Team divisions at the U.S. Open Swing Dance Championships in southern California. In total, four of five routines choreographed by Guy were place-winners.

Nancy Fry discovered her passion for dance in 1981 and has been dancing ever since. Over the years she has participated in a large variety of partner dances, and enjoys it all. She began teaching Lindy Hop and swing-related jazz movement classes in 1994 with Seattle’s Savoy Swing Club, for which she was a founding member. At the U.S. Open Swing Dance Championships in 1999, she and her dance partner, Guy Caridi, placed in both events in which they competed. Nancy’s joy on the dance floor is in connecting with her partner, and she believes that this connection is where the magic in partner dancing is to be found. Nancy began teaching swing and waltz with Northwest Dance in 2004, and is happy to be part of this great team. Her teaching focuses on that special connection between partners—helping her students develop the ability to communicate and move together, to lead and follow, while having fun.

A favorite with Seattle dancers (and non-dancers alike) since 2007, the Ben Thomas Tango Trio is dedicated to playing music that engages both dancers and listeners. With repertoire ranging from classic Golden Age tango to more modern and original compositions, they bring decades of combined professional experience to create a rich ensemble sound. Ben became infatuated with the bandoneon after learning to dance tango. In 2007 he went to the Academia Nacional del Tango in Buenos Aires and studied with several tango greats, including the maestro bandoneonist, Osvaldo Montes. He has been performing tango music, traditional to Nuevo and original compositions, over the last decade with Tango Abrazo, Q. E. D., and the Ben Thomas Quartet. http://notesbyben.com/

Beginning Tango lesson with instructors Tony Fan and Ilana Rubin | allseattletango.com
Tony Fan and Ilana Rubin bring to tango a life-long interest in dance. They were both trained in ballet and modern dance, and bring to tango an exciting, accessible, individual style. They teach a regular curriculum of tango classes in the Seattle area. Their lessons, which focus on understanding the building blocks and musicality of tango, have grown increasingly popular since their first weekly classes in 1996. They are now leading one of the major tango schools in Seattle and offer special workshops around cities in the west coast. Their workshops have been featured in the Seattle’s Northwest Folklife Festival as well as many tango communities in the west coast and Canada. Their regular classes are offered through Seattle’s Neighborhood Centers, the Bellevue Ballet Arts Center, WAC, North Seattle Community College, Shoreline Community College, and Bellevue Community College.

You can support these fun Dancing til Dusk events:

► Go to our Dance for Joy! website for other great dance classes and events!